Regular
remember a few years ago when you couldn't do shit without about hearing about this guy?

well at lest we got some good memes

Regular
George Floyd was a waste of time. Nothing would have happened if he just complied. For some reason, black people seem to have a hard time understanding that concept.
Not to mention that the black community is so retarded that they seem to think you need to glorify black criminals that mostly victimize their own community.

People also don't seem to get that to stop another bad guy, you need another one that is a bit more stable to do so. With all the screaming about defunding the police it
just showed that they just wanted more dead bodies in the streets. Zero policing means lawlessness, but then again that's the Marxist dream, anarchy in the name of social justice
regardless of the facts that there was no real injustice other than a criminal that died during the arrest while he was on drugs.

Derek Chauvin just became the scapegoat of a community that couldn't cope with the fact they high on the crime, let alone seem to have the mentality of a 4-year-old.
The majority of poor in America are Whites, yet they still are lower on the crime stats than the 13%.

The whole society has gone retarded with the LGBTQ child groomer and moronic people that just want to use race to live as a BLM/Antifa Marxist grifter.

This image looks sadder than when it happened to George Floyd.

This is a good one, George Floyd Jojo. 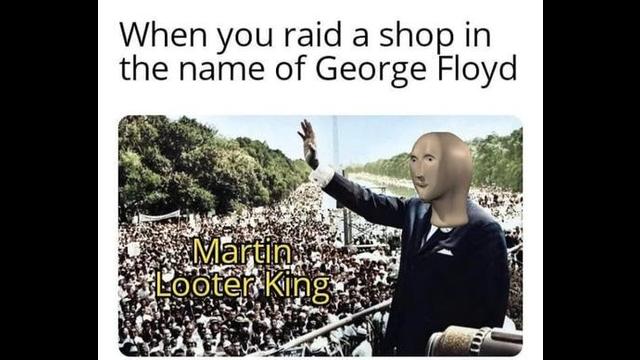 Regular
Found a really sad one

ALL HEIL SAINT FLOYD THE KANG