Thread Description
Talk about upcoming and your favorite vTuber outfits!

Since HoloEN Gen1 just announced there first outfits, it would be a good opportunity to talk about upcoming and your favorite vTuber outfits. 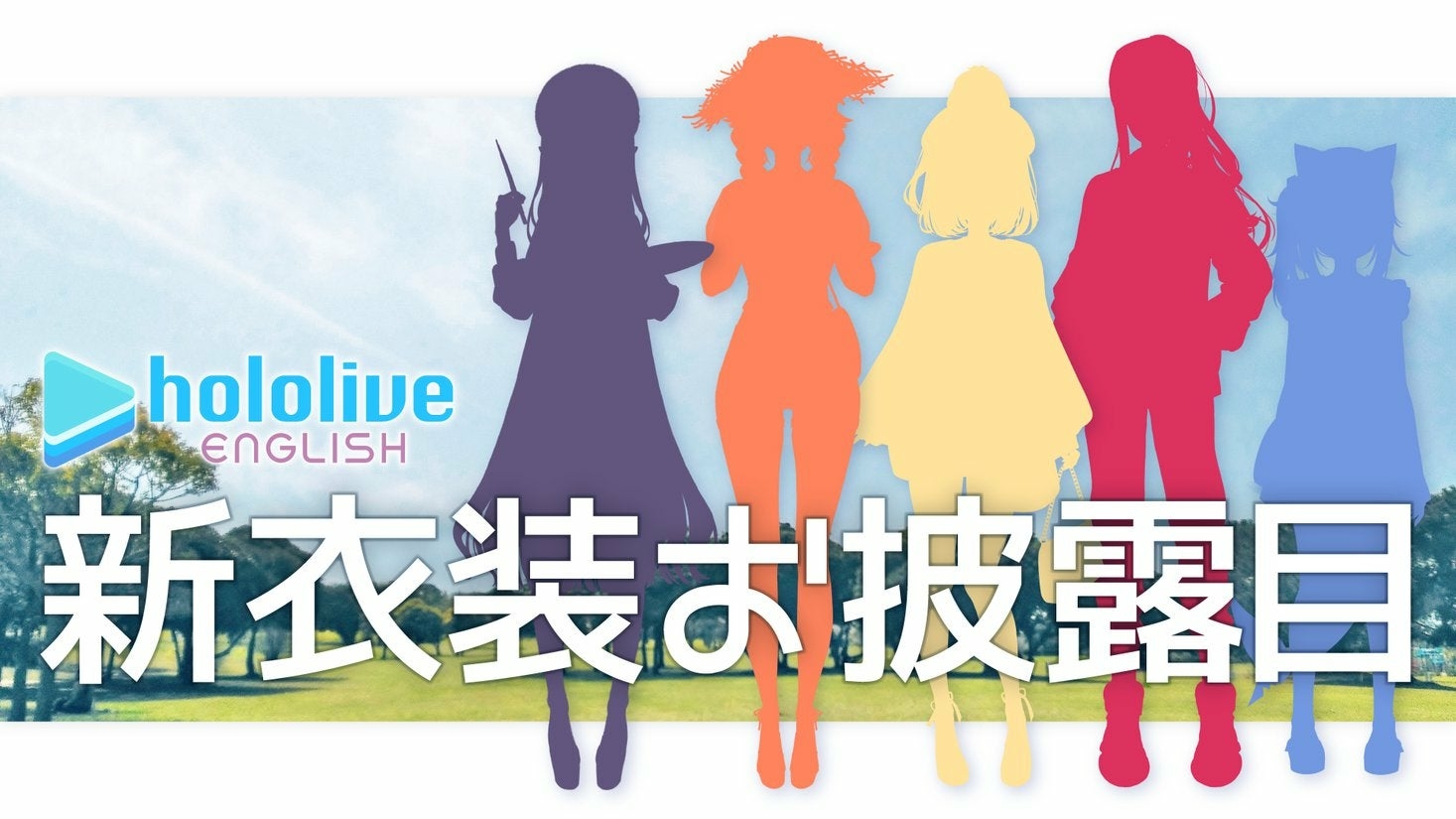 Ina: artist with hat (that french one)
Kiara: country girl with strawhat (hips )
Ame: no idea seems like bubba is her hat?
Calli: idk how to call it but something like towa's style with Ponytail
Gura: CatShark

I'm the most hyped for inartist

@vyragami drew something that could fit.

Patron of the Forums

Definitely looks like a tiny bit of fabric is extruding, so Kiara in shorts too?

Ina: artist with hat (that french one)
Kiara: country girl with strawhat (hips )
Ame: no idea seems like bubba is her hat?
Calli: idk how to call it but something like towa's style with Ponytail
Gura: CatShark

I'm the most hyped for inartist

@vyragami drew something that could fit.
Click to expand...

Well now, this was a welcome surprise.

Ina's default design is already perfect so it would take a lot of work for the costume to live up to it, but if she gets to have some input in how it looks (which I think is the case sometimes?) then I have every belief it'll be very pretty.

Kiara with a country girl aesthetic could get me to start watching her streams again, as I anticipate it would be much less conflicting and garish than her default look. Plus, this time she will properly only have one hat. Regardless of whether I like her content or personality, Kiara tends to generate a LOT of high quality fan art, so if this costume is great I'll be pleased all the same.

Ame's reveals little to nothing, so I'm completely in the dark on what this could be and how it might look. I may agree with you Dark in the sense that the object on her head might be Bubba, which could be cute, though the idea it might be Smol Ame based off Vyragami's prediction woudl be great too.

Calli's gives me the impression she's going to look like a dude or at the very least masculine in appeal, which I am absolutely not a fan of but would not be surprised by in the slightest. She's already more or less wasted the mommy reaper design so I guess this would be more fitting anyway.

Gura's form is giving me the most excitement. I've always loved the catshark meme since it makes our adorable apex predator that much cuter. What really stands out to me however is her hairstyle. Ponytails drive me wild, and one would fit her character and personality so damn well.

All in all, I'm glad these five are getting a proper new costume, even though the Walfie rigs were cute. Here's hoping they receive even more love in the coming months!

DarkMahesvara said:
I'm the most hyped for inartist
Click to expand...

Same, I absolutely love "artist girl" designs. The cute hats, the different colors of paint splashed over their clothes, the oversized brushes and palettes.
Folie from Bravely Default 2 is a perfect example. If Ina looks half as good as this, I'll be pleased! 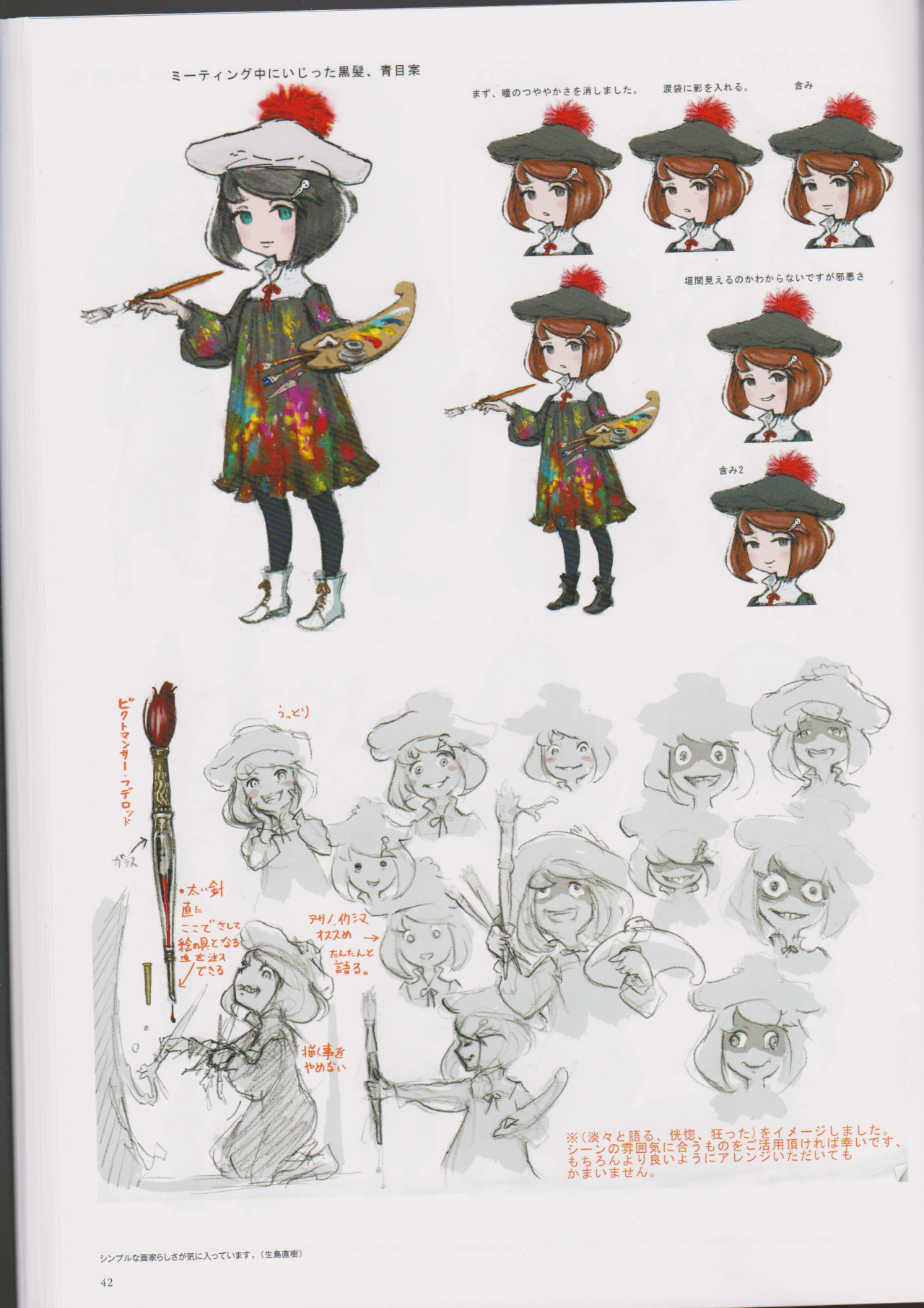 won't Calli be some sort of tomboyish streetwear?

Regular
Patron of the Forums
Ina and Gura are the ones that I am most excited to see! Though country girl Kiara might be nice. Ame's silhouette gives almost no hint, except apparently she's holding a purse?

Gura with cat ears would be amazing, but the details that got me the most excited are the shoulders. This could indicate to a maid outfit. A cat-eared maid Gura!

Ina's outfit reveal stream was great! Can't stop smiling even after it ended, she is so sweet

Love the simple but beautiful design. The glasses, forehead and leggings are perfect

Regular
Not sure where to post this, the femcels over @ lolcow farms the female centric imageboard focused on lolcows ran by admin-chan. These "anons" have produced some funny reaction and do discuss the designs of the characters.
I'll link the first thread which is rife with reactionaries and fools of every stripe, yet they do find nugget of info from time to time.
https://lolcow.farm/w/res/106239.html / (Archive) 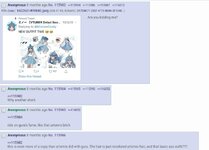 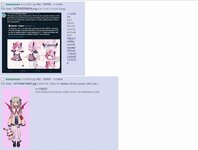 And thread 5: https://lolcow.farm/w/res/131584.html / (Archive)
A good portion of these posts could fit in the loli drama thread.

This thread is meant for people of this forum to comment upon designs and share their favorites. Not exactly trying to host any negativity outside of constructive criticism or personal takes.

These sorts of community watch posts are best placed in a thread of their own or somewhere in the "Internet Bullshit" sub-forum (e.g. "Lolidrama" as you mention).

LOL! Okay, I don't think anyone was expecting this. Coco's 1 million graduation outfit was not a dress. It was not a robe. It was not anything lewd. It's dragon jammies.

Here's the Twitter link with a preview of the design from someone who was "in charge" of the costume:

Here are some reveal angles and shots of the costume as seen in the stream above: Getting Drowned in the superchats! 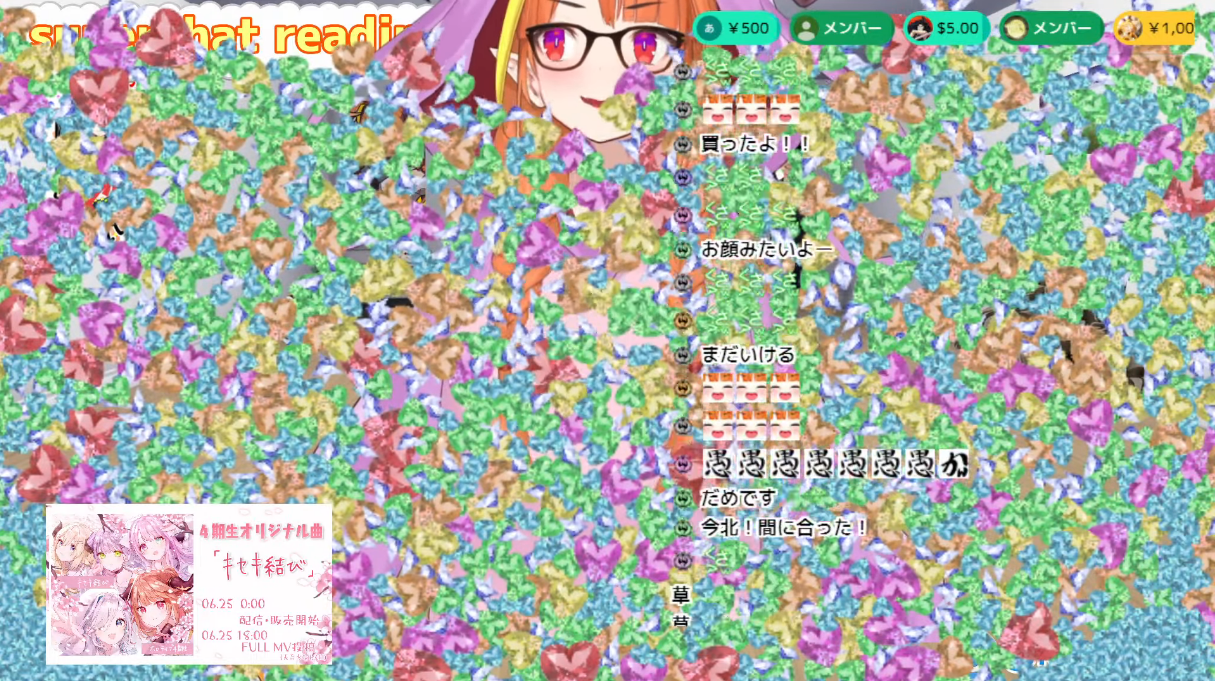 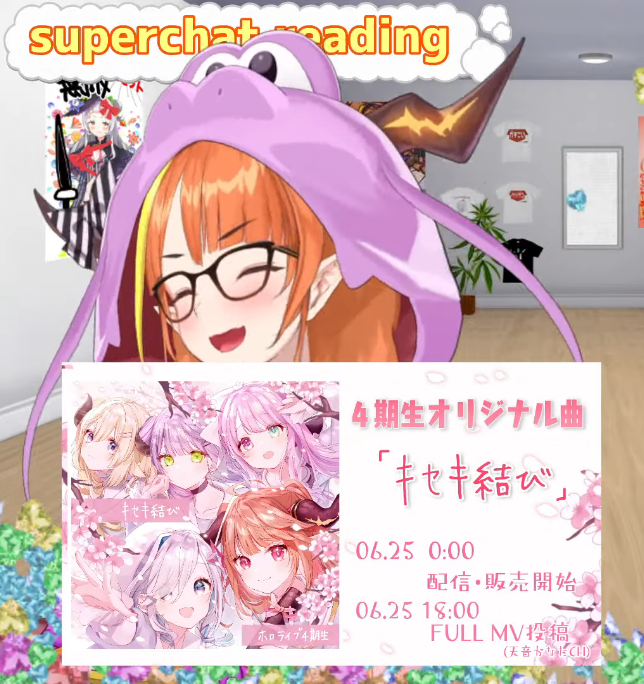 ​
I'm so fucking happy that she's happy. It's always great to see a smile on her face. While this costume isn't the sort of thing I'd choose for Coco, especially with her having one of the best figures in the game, it somehow fits her perfectly. Goofy yet wholesome. Love this bitch. Hope she has a great final week and change.

On a side note, I still can't get over how, as one user on KF put it, that the overall design looks like a cross between Spyro and Yoshi. I'm also seeing Barney inspiration there, which might make some sense if Coco had some input given she is from the States, but who knows? This purple amalgamation, whatever it may be, is still our Kaichou!
Last edited by a moderator: Jun 29, 2021 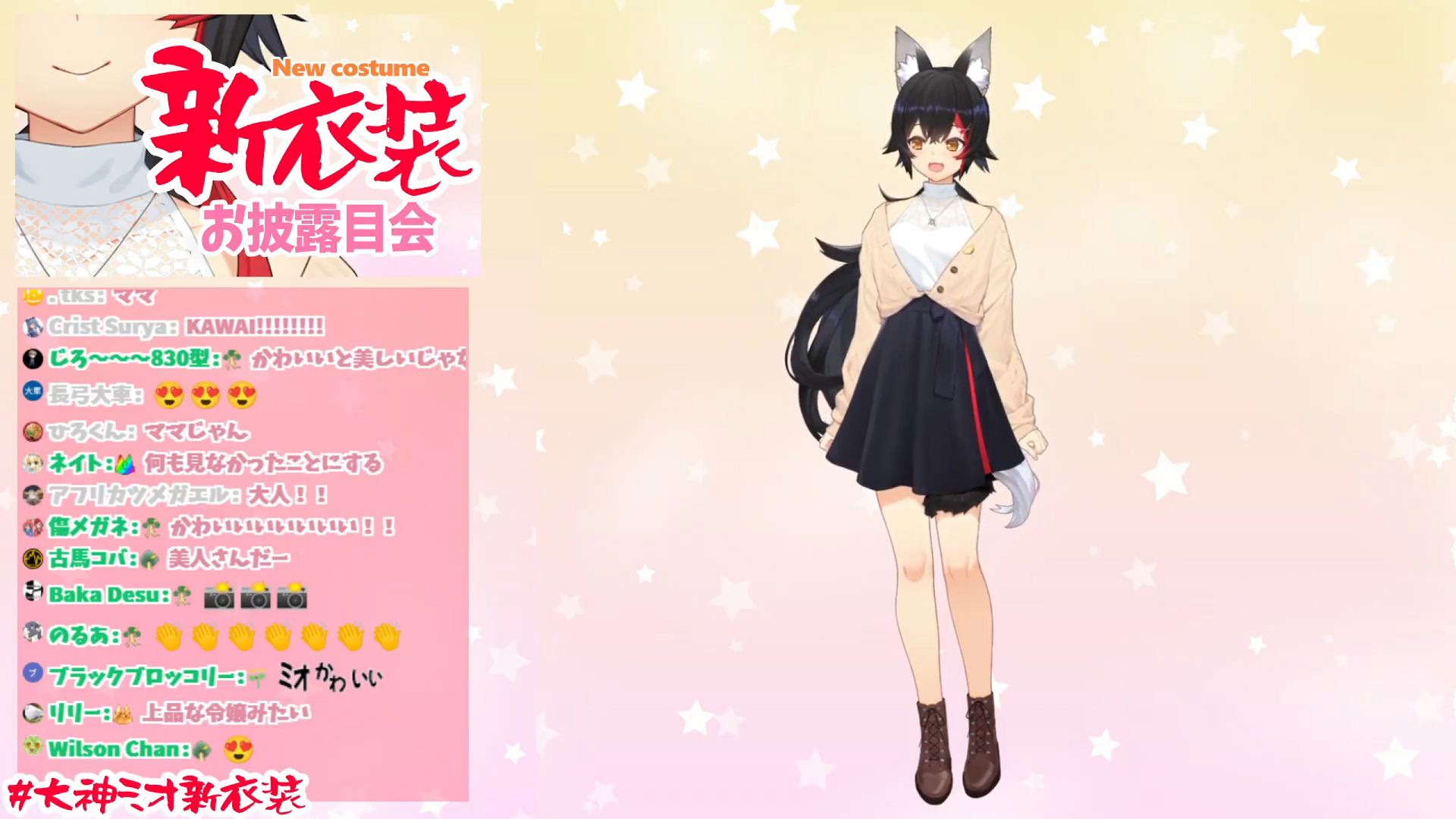