For people who really really love to stand out 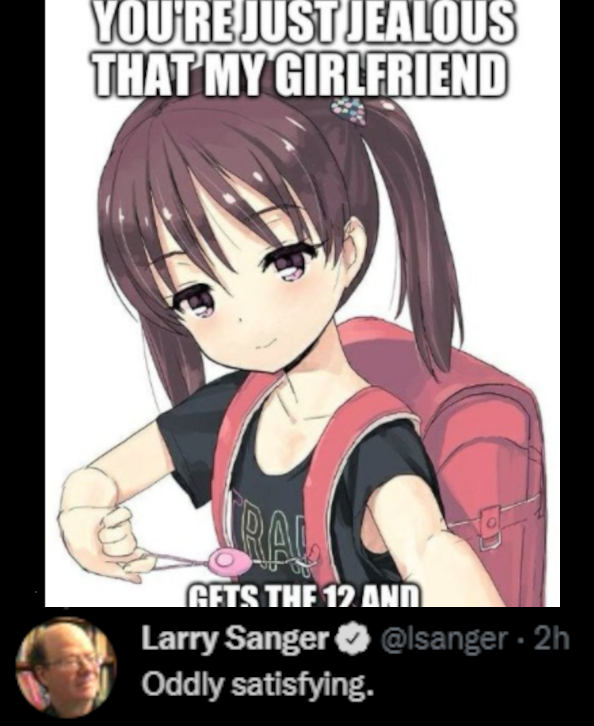 Larry ‘One Man Irish Famine' Sanger​
Larry Sanger is an aging tech guy from the mid 00s notable only for co-founding Wikipedia, starting a failed Wikipedia alternative, and writing a bunch of basic bitch philosophy books. He’s also a proud hater of fictional inter-racial marriage. Especially when it involves those infernal famine-dodging potatoes known as ‘Lalafell...’ Oh, hi, I’m Scorn! You may remember me from my poorly maintained thread on Noralities and general misanthropy. I’m bringing you a very special one today, ongoing as I type this, involving Wikipedia, its co-founder, The New York Times, the Metaverse, MMO marriage mechanics, a database, and even the grayness of my beard. Exciting stuff!

Before I begin, however, I have a small tinge of regret; normally I’d rather present things as a narrative. Establishing a person, their life, and their worldview to provide context for their public meltdowns. However, the more I look into Sanger’s public life the more I realize how deep the rabbit hole goes. He is the proto-typical example of the reactionary grifter with a lot of history to shift through. As such I will separate this into two posts: One describing his recent escapades and another digging a bit further into him as a person. So if you're just here for the drama you can safely stop after this post.

The inciting incident occurred with the New York Times putting out an article about a marriage ceremony occurring over Facebook’s VRchat clone thing, ‘Metaverse.’ It's not a terribly interesting article, simply an interview with wedding organizers and investors navel gazing about the possibilities of what a wedding in virtual reality might look like, and examples of such things happening already. In many ways it is reminiscent of articles that were written about the game Second Life in the 00s. The comments to the tweet the The New York Times put out to advertise this article are, as you might guess, filled with terminally online Chicken Littles kveching about how this is the sign of the sky falling, or a crypto-communist/transhumanist elite/Satanic interdimensional pedophile vampire attempt to 'normalizing' affronts to the sacred institution of marriage. Other tweets, however, were filled with various examples of such a phenomenon already existing in venues such as World of Warcraft, Second Life, VRChat, various Korean MMOs, and, of course, Final Fantasy XIV.

Cute, innocuous, if a little Deviant Art-tier, and apparently the players of the two characters are married in real life. I could show this to me Ma and she'd also see it as a cute, if nerdy, thing. Our boy Sanger wasn't having this though. Flying in bravely below radar he dropped this MOAB of a response to this affront to all that is good and holy in life.

This led to the normal argument over lolicon shit (despite it not being terribly related) which gave us this interesting gem.

Mr. Pizza was into lolicon apparently? I’m having to check the PACER documents for this and it's slow going, as US court documents are a mess, but thus far I don't see anything mentioned in the criminal complaint outside of the texts he sent to the agent who set up a sting. And no one reporting on the case talks about illustrated pornography, something that I think an alternative news rag (archive) reporting on notable cases of sex offending would hone in on. It wouldn't surprise me, of course, if the claim of Peter Bright liking lolicon art was an outright fabrication or willful ignorance on Larry's part; like trucks careening through a festival in France such behavior is part and parcel for reactionaries who conveniently write fanfiction about people or groups to fit their narrative of secret pedo conspiracies. As for Larry himself this isn't even a new thing for him (as you will see later in the second post). Oh, and rest assured he has his secret network of spies apparently making a 'database' of the people who ratio'd him. They'll wipe your miserable ass off the continent!

Other screenies of the 'database' (courtesy of @Hibiki )

I'm pretty sure if I got ratio'd by Bird App Lolicons I would French kiss a power drill in shame; it's a lot like having the special ed class ostracize you for being 'too retarded.' As for Warden up there, the person who only ever wanted to hit Prt Scr at his friends cringe fantasy MMO wedding? Just checking their Pixiv I don't even see a hint of anything that could be construed as 'pedophilic;' I don't even see shota cock. They just seem like a fag and/or fujoshi that just really likes muscly men and bears. Completely and utterly innocuous, I wish them a merry life of pounding asspussy.

Regular
Patron of the Forums
Reserving second post. Holy fuck do this man's grandchildren need to check up on him.

Anyways, very well written thread. It's organized, informative, and funny. This is just the type of content I like to see here and want to foster!