Regular
Got Fallout: New Vegas on GOG, and it has been very fun, looking for mods for my next playthrough.

You still dicking around in the capitol wasteland or have you moved on to the Mojave? How you doing with the DLCs as well?
Click to expand...

Actually I never reached it. I started off in the Mojave for some reason, maybe because I didn't properly install NVSE or something. Kind of a shame but ehh, what you gonna do. I mainly wanted to try the New Vegas DLCs anyway. I wanted to do them so that I got the genuine Joshua, Mobius and Ulysses experience. Though after meeting the first two I think I was over hyping them a bit, and that their best moments were already spoiled for me. I didn’t get to Lonesome Road yet though so there's still hope for the flag bearer.

Well I was thinking about doing something like The Rise of Bossman in a PDF format with text and images. I might still try this but, well I reinstalled Steam a couple of days ago and didn’t realize that that would not only uninstall all of my games (if I bought it from Gog would something like this still happen?) but it would also delete all of my screenshots as well, so I might not have any visual media to accompany it if I tried to write it. I might write down my adventure in the Zion and the Big empty but that’s beside the point.

holy shit it is about time.
Click to expand...

Yeah, hopefully the review score on steam improves soon. A couple of people have already made videos on them (1) (2) (3). While there still seems to be some mods that work a lot of them don’t, and Tale of Two Wastelands is unfortunately one of those mods. This has two effects: One, I think it broke my New Vegas which makes sense since all the save files are technically missing half a game now. I'll try deleting them and turning off other mods to make sure they aren't causing problems and see if that helps. Second: I wanted to make the first real documented playthrough of a Two Wastelands playthrough but now that doesn’t seem to be possible: 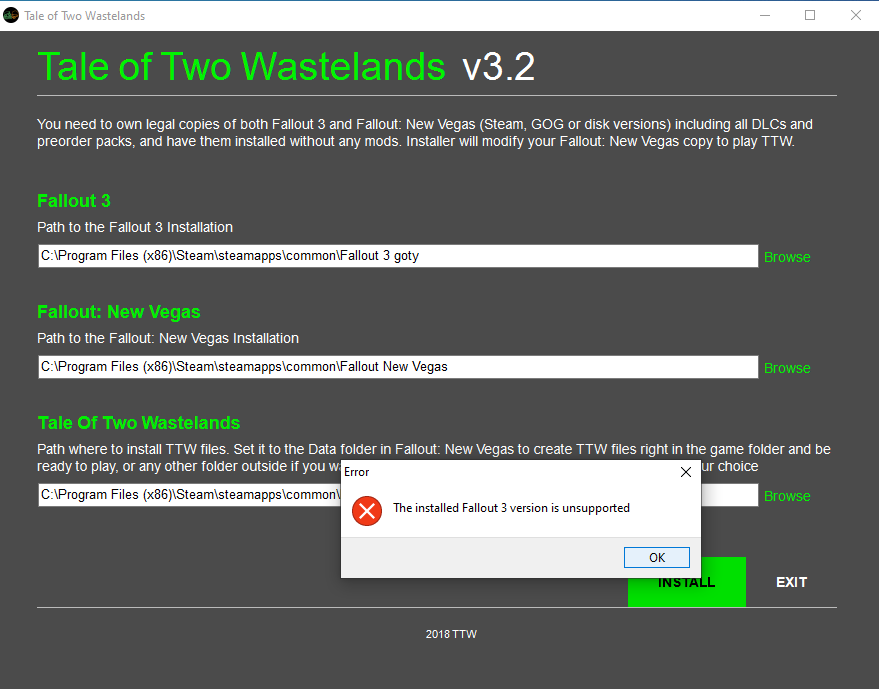 This leaves me with 3 options:
(1. Wait for an update that may never come because the creator has either been working on a different update that still hasn’t been released or has totally abandoned the project.
(2. Start learning how to use the GECK and attempt to create a jank solution, creating the first Tale of Two loosely Conjoined Wastelands.
(3 Give up.

Regular
Okay @PureHeartedVillian I've gotta ask, how's your game going?
You finish New Vegas and 3 yet, if not where are you at, and what's your thoughts?


PureHeartedVillian said:
Actually I never reached it. I started off in the Mojave for some reason, maybe because I didn't properly install NVSE or something. Kind of a shame but ehh, what you gonna do. I mainly wanted to try the New Vegas DLCs anyway. I wanted to do them so that I got the genuine Joshua, Mobius and Ulysses experience. Though after meeting the first two I think I was over hyping them a bit, and that their best moments were already spoiled for me. I didn’t get to Lonesome Road yet though so there's still hope for the flag bearer.
Click to expand...

Ah man the DLCs, I didn't actually play most of them until God knows how many runs later. The only one I consistently played was Old World Blues, and honestly I think that was the best of the DLCs.

Honest Hearts was a fucking boring 40 minute slog, and the best part of it was The Burned Man/Joshua, Sierra Madre/WhateverThisDLCWasCalled was quite enjoyable honestly, but it was rather linear, Lonesome Road was... interesting... but a let down as well. Nowhere near as bad as Honest Hearts though.

You finish New Vegas and 3 yet, if not where are you at, and what's your thoughts?
Click to expand...

Well remember when I told you that the fallout 3 update totally and utterly messed with Tale of Two Wastelands? Yeah as far as I can tell, all of my saves are corrupted. So I’m starting my ceremonial second playthrough early now I guess.

That being said I wanted to try recording this playthrough and make a video out of it. So I got to ask, if I made a video could I upload it to the forums? I’ll probably upload it to youtube as well if they don’t have a problem with it so I can understand if it’s too much of a hassle and you say no.

That being said, my fallout adventure has kind of been put on hold because I’m trying to mod Jedi Academy (a pretty good game) so I can play with my family for my birthday. That being said, from my first playthrough there have been a couple of stories I could tell you.


-I swapped my hoarder trait for hot blooded because constantly seeing a (-) with every stat was destroying me.

-I helped Goodsprings because of the Fallout 3 G.O.A.T. assigned me as the vault’s chaplain for a reason.

-I took the Baddy’s Boy perk because I’m dumb.

-I was also surprised to find the Mojave Express was in the game and not just something for my character's backstory.

-I actually had a theory that when Benny said that “the game was rigged from the start” that it meant that the guy behind the Mojave Express had tipped Benny off and was just letting me walk to my death to cover his track form Mr. House or something, but I don't think that’s the case after meeting him.

-There is a reference to some completely random npc courier who is not important or interesting in any way, and this is in no way surprising and impressive that they had the foresight to put this snippet in the game.

-I cleared out the hotel and let the deputy leave because he had a rough day, this wasn’t because I'm a good boy but because I didn't realize he’s lazy bum.

-I got the lady killer perk for extra damage against woman because I have issues.

-I took the incinerator from the convict boss and enjoyed cleansing the top floor of the building with the power of enclave engineering! Then I was introduced to the game's weapon condition mechanic.

-I rode on the roller coaster.

-the Jackal Gang messed me up a bit.

-I helped the NCR and a service rifle went missing.

-I told Vulpes I'd do what he wanted… After reloading a save where mercy killing the powder ganger made them all attack me.

- I looted Nipton and got a laser rifle, this was good because I have an energy weapon build and was annoyed as I repeatedly had to scavenge ghoul corpses for weapons.

-I would later learn what (GRA) means and buy the laser pistol from Chet with all the modifications down the line.

-In Nipton I found a Mr.Gutsy and freaked out, pulling out my emergency grenade launcher I got from the viper gang.

-I found a blue star sunset sarsaparilla bottle cap before I got ambushed.

-I got a fully automatic 9mm gun.

-I found a building that upon checking the internet, I learned that no one interesting, important, or American has ever lived there.

-I saw some traders getting attacked by the legion and protected the traders, this was a huge mistake.

-Quick break to tell you about how I played New Vegas wrong. In the game you have a certain weight limit that you can’t go over or else you’ll be severely crippled. So anything except what you absolutely need/want should be ignored or sold with only a few items stored in a location you can reach easily like Doc Mitchell's house or the Novac apartment. I however did not do this and instead tried to hoard at least one copy of every time in the duffle bags at the gas station atop Goodsprings. This not only made the game much more tedious but it also made me short on caps more often than not.

-Also I like to imagine that Ringo wants to head for the crimson caravan company (because despite saying he’s headed there he just is at the saloon whenever I visit) but want to get a goodnight sleep first, but my character is all ways using his bead and bags now so he just wanders around the saloon.

-I reached Novac and met up with Victor, who I talked to at Goodsprings.

-I talked to some pilot lady who has no previous affiliation to any organization that I would care about.

-I also talked to a musician who was in a jam and I told him if I ever need a singer I’d look him up.

-I talked to the store owner and saw that he had an incinerator in better condition, but I was low on caps and figured I could get it later.

-This was a huge mistake, as I would both visit Zion and become the boss of the Big Empty before he would restock.

-I talked to Manny and was surprised not to find Boone, but I figured he just showed up during the night shift.

-He asked me to take care of a ghoul problem at REPCONN.

-I supposedly did this for information on Benny but I already knew where he was and I don’t really have any interest in revenge, after all he already said he was sorry.

-If I wasn’t under contract to deliver it to it’s rightful owner I would be fine with letting him go on and have the chip.

-Anyway I was feeling a little shy about going up against super mutants due to the fact that a mere group of ferals almost did me in.

-I wanted to get ED-E as my first companion and have him join me in storming the place.

-So I got to looking for the necessary pa-

-”The Caesar has marked you for death and the Legion obeys, defend yourself!”

-I died more than once and after beating them I started to develop Legion paranoia.

- At least I got some caps from their uniforms and weapons.

-After finding out that Sunny sleeps in a trailer, finding an abandoned radio station, and blowing some guys head off over geckos, I had the necessary components to perform a Doc Mitchell on ED-E.

-To be continued.
As for the DLC (which I'll go in depth for later) I only did Old World Blues and Honest Hearts. I can understand why the popular consensus is they way it is. I loved Old World Blues even if it brought me through the wringer. Honest Hearts also had it's merits but I'm not itching to go back to Zion unlike with the Big Empty.

PureHeartedVillian said:
Yeah as far as I can tell, all of my saves are corrupted.
Click to expand...

shame, good luck with the new run then

PureHeartedVillian said:
if I made a video could I upload it to the forums?
Click to expand...