Happenings Japanese artists getting suspended on twitter because of Russia This is nothing new because the Russia, internet police Roskomnadzor has has been threatening Japanese artists for quite a while now, for as back as 2015

​
But twitter most of the time didn't comply with their demands, so Japanese artists were relatively safe.. until now. Earlier this year Roskomnadzor threatened with blocking twitter if they didn't properly removed content that was breaking the laws of their country.

“Twitter is being provided with additional time to remove all prohibited content from the social network and bring its activities in full compliance with the laws of our country.”​
Click to expand...

Here is an article talking about it
Archive

Russia’s state censor, Roskomnadzor (RKN), has decided against blocking Twitter, but will continue to throttle the social network’s traffic until May 15. In a statement released on Monday, April 5, RKN said that this comes against the backdrop of “decisions first adopted by the company Twitter on changing the principles and speed of their own moderation services” in Russia.
“Twitter is being provided with additional time to remove all prohibited content from the social network and bring its activities in full compliance with the laws of our country.”
According to RKN, Twitter has removed around 1,900 of the more than 3,100 materials that they wanted taken down for containing “child pornography, pro-drug, and suicidal content.”
According to Russian law, social networks must remove prohibited content within 24 hours of receiving a notice from Roskomnadzor. According to RKN, Twitter takes 81 hours to remove content on average.

Roskomnadzor began slowing down Twitter traffic in Russia on March 10, on the grounds that the social network had failed to remove “illegal” content. RKN also threatened to block Twitter in Russia entirely, in the event that the social network refused to comply with its orders. On March 23, RKN reported that Twitter had started work on removing banned content, but underscored that the process was happening at an “unsatisfactory pace.”
Click to expand...

As I said, Twitter has no obligation to obey what Russia says, but they are doing it because they don't want to get blocked from Russia Another Japanese artist that got suspended
Tweet||Archive

Of course Japanese twitter users are rightfully mad about this, why do they have to obey Russian laws? 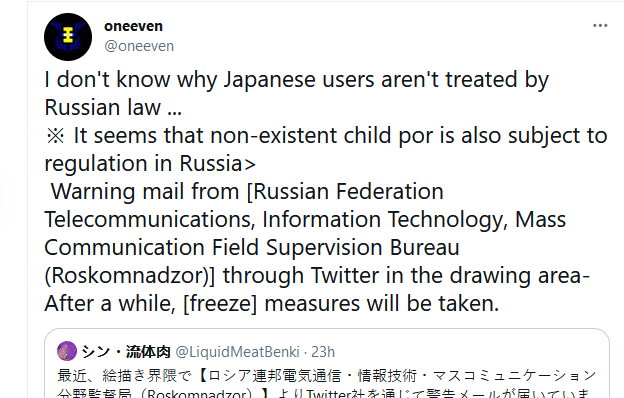 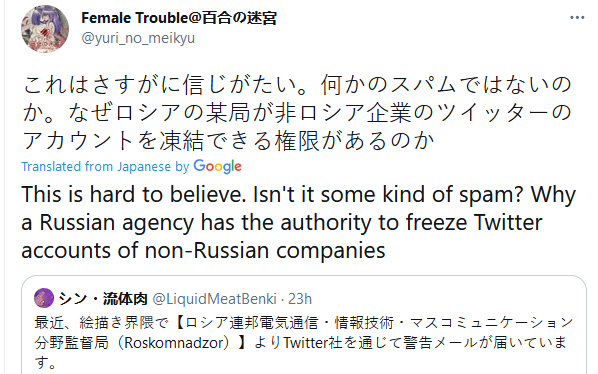 
Here is an animation from 2017 about the Roskomnadzor(click on CC to enable english subtitles), the fun thing is they show a weaboo getting arrested by them at 0:52

Artist
Regular
Saw this on the Pleroma instance. How exactly does something like this get enforced, except through fear? Is the KGB going to just roll up on these artists' houses/studios in Japan and yoink them to the motherland?

Cayhr said:
Saw this on the Pleroma instance. How exactly does something like this get enforced, except through fear? Is the KGB going to just roll up on these artists' houses/studios in Japan and yoink them to the motherland?
Click to expand...

It's twitter enforcing it.
They get a message from Mother Russia and obey. It says it in the letter "Twitter received official correspondence".
I don't think they have any reason besides money and Russian userbase to enforce it, but don't quote me on that.

Regular
I think I vaguely recall a similar instance like this but it was Germany wanting twitter to ban peoples posts. and in that case, they only banned posts from being viewable from within Germany. not full-on account suspensions

what happened to trump being a Russian plant and Russia being the big bad? aye, jack?
what are you doing obeying Russia jack, you hobo looking motherfucker

I remember awhile back germany was censoring shit on twitter but they only were invisible in germany, and were not sus’d outside of the country. I can only hope they just fuck off with this shit instead of screwing around with artists accounts

This is because twitter, they typically ignored requests like this but now they are throwing artists to the wolves so Russia doesnt ban the platform in their country. Pathetic of twitter tbh, they are trrying to please Russia above all else.

Regular
I guess yeah.
I'm just thinking that long term, global networks like twitter simply can't really function without being hyper cleaned of anything adult.
I'm glad I found great artists using it, but I won't be surprised if it's temporary before they move to somewhere more specialized in nature, mastodon style.

Regular
Patron of the Forums
Fuck off Russia, go back to your stupid Cold War with the US and leave Japan alone.
D

Here is a related article that is about a month old. https://www.voanews.com/silicon-valley-technology/russia-clamps-down-twitter

In its statement, Roskomnadzor said Twitter had failed to remove 3,168 tweets promoting drug use, child pornography, and teenage suicide and ignored "over 28,000 initial and repeated requests" to address content violations.
Click to expand...

Grönsak said:
Here is a related article that is about a month old. https://www.voanews.com/silicon-valley-technology/russia-clamps-down-twitter
Click to expand...

Well, Twitter does have an actual child pornography issue.

Wasn't it covered sometime ago that twitter is not going to get rid of this shit, because it doesn't violate their rules of service or some bs like that?

Fennec_fox said:
Wasn't it covered sometime ago that twitter is not going to get rid of this shit, because it doesn't violate their rules of service or some bs like that?
Click to expand...

I don't remember what happened with that, but that's the last thing I remember about it, kek.

I know but "promoting" child pornography I would interpret as loli.

Regular
FUCK YOU, RUSSIA! LEAVE MY ANIME LOLI'S ALONE!
I WANT SO LITTLE, DAMN IT.

Regular
Patron of the Forums
Last I heard, the timing of these demands was pretty suspect, the Kremlin has found the existence of uncontrolled social media undesirable for the powers that be, and needed a way to put the screws on them in a way that wouldn't draw the ire of US Politicians (and given everyone's distaste for tech giants now, was even applauded). 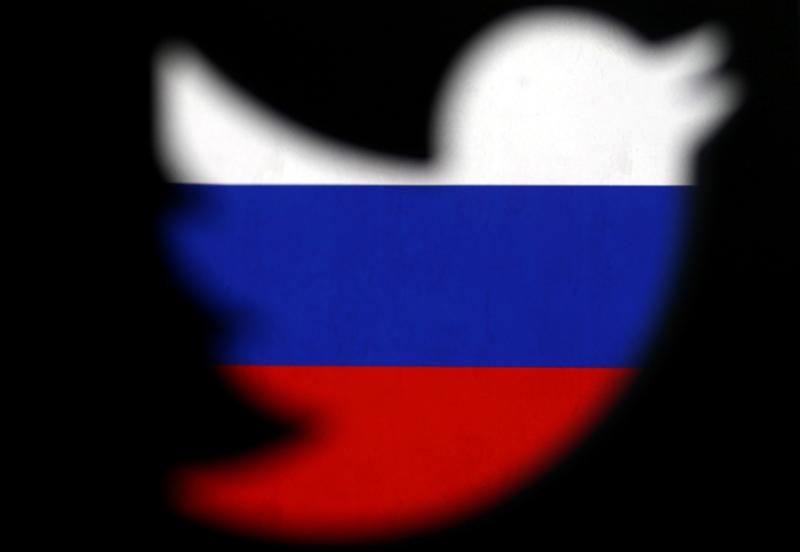 Russia has demanded that Twitter delete the account of MBK media, a news website critical of the Kremlin, for what it said was a violation of Russian law, MBK said on Wednesday. 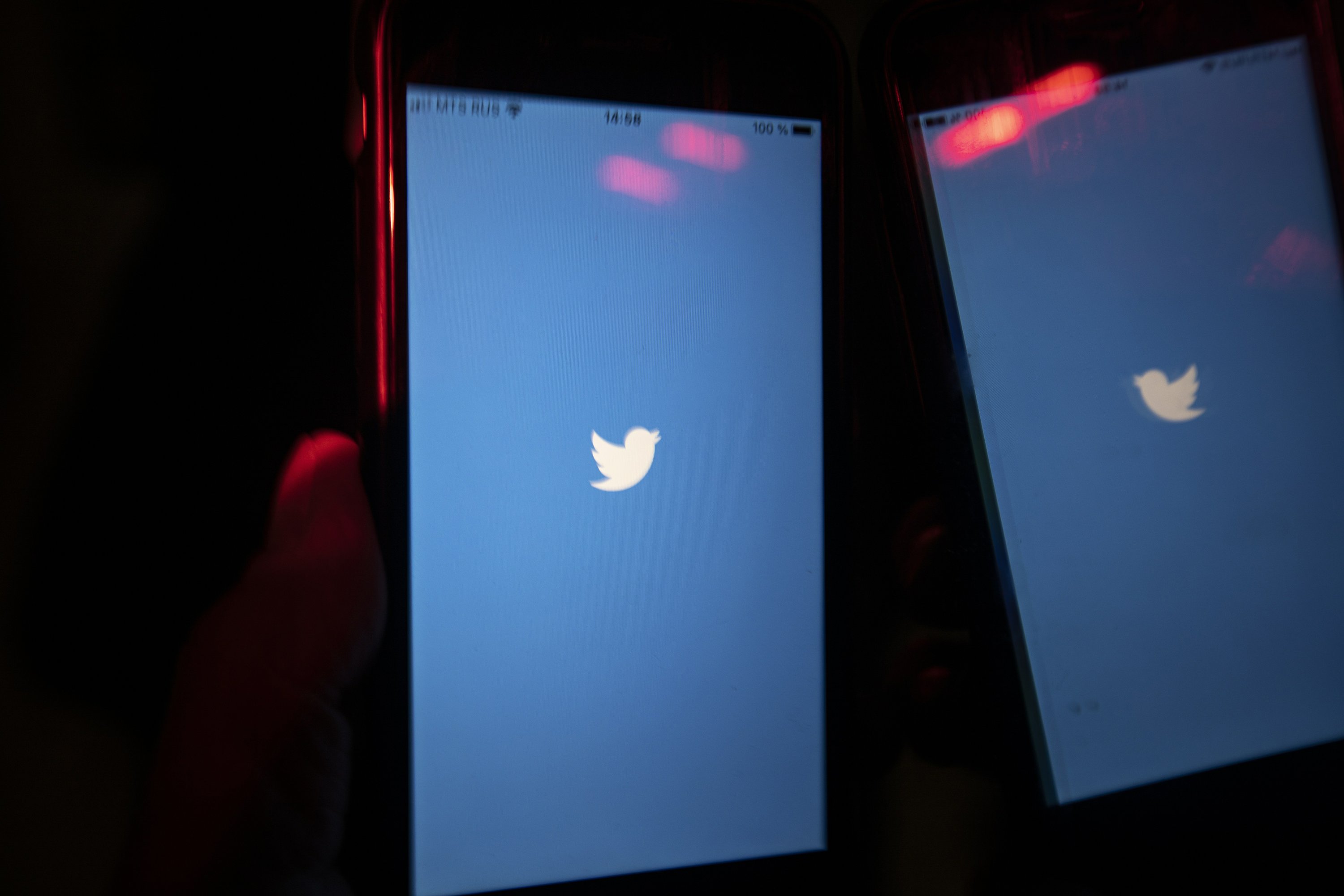 MOSCOW (AP) — Russian authorities said Tuesday they would block Twitter in a month if it doesn't take steps to remove banned content, a move that escalates the Russian government’s drawn-out standoff with social media platforms that have played a major role in amplifying dissent in Russia...

apnews.com
Direct links because archive.is is being a slow cunt right now.

Remember, don't ever take anything said by a politician, influencer, journalist, and especially a game's journalist on face value, doubly so if it seems to be a benevolent act. To quote a bad cartoon, information is ammunition, and the timing in which somebody chooses to fire a round off matters just as what you pack the round with.

Regular
Found an article talking about it, but in 2015, this shit has been going for quite a while